A beginners guide to solar power 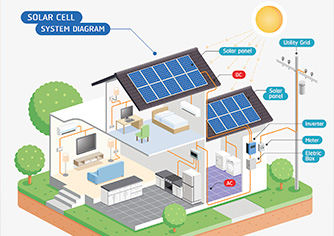 A look at how solar power works and the key components required to harness the power of
the sun.

Solar power is our way into a brighter future, there’s no doubt about that. In fact, in 2017, the
International Energy Agency revealed that solar had become the world’s fastest growing source
of power. And the benefits are plentiful, there’s no shortage of people who will tell you why it is
good for the planet, how it helps you save energy and money, and so on. But let’s dial it back a
little. Before we dive into what solar power can do for us, it’s important for us to understand how
it works and what exactly switching to solar entails.

There are five key components to a solar system: panels, inverters, racking, a monitoring
system and batteries.

Panels are the most commonly known component and the starting point for power generation.
Photovoltaic (PV) solar panels are made up of several silicon-based cells with a positive and
negative layer that create an electric field. Cells are manufactured in two cell formations,

Panels also have a glass casing to protect the cells, insulation to guard against heat and
humidity and an anti-reflective coating for maximum sunlight absorption. The number of panels
you need and their placement will depend on energy requirements, usable surface area,
climate, peak sunlight in locality and efficiency rating of the panels.

The bridge between the panels and the home, inverters convert the direct current (DC)
generated by the solar panels into alternating current (AC) which powers a home or building.

String or centralised inverters are the least expensive and most common but can prove to be
inefficient if there is an issue with even a single panel. Micro-inverters, while a little more
expensive, are individually attached to each solar panel, allowing them to function at maximum
potential even if one or two panels are shaded. Lastly, we have power optimisers which are
installed in each panel to optimise the output of each panel and are connected to a string
inverter for final conversion to AC.

Panels cannot be attached directly to a roof or other surface. They must be mounted on racking
systems which are angled to the optimal degree of sun exposure. These systems are often
made with lightweight aluminium and clips equipped to withstand the elements while minimising
impact on the roof.

A monitoring system offers detailed information about the performance of the solar system. It
measures and tracks the amount of electricity produced and identifies any issues to be
resolved. There are two types of monitoring systems, an on-site system that is installed on the
property and a remote system to which data is transmitted directly and can be accessed online.

An optional component, batteries store excess electricity generated by the PV system and
supplies that electricity when the electric grid is not functioning. Solar batteries incorporate a
variety of technologies, including lead acid, lithium-ion and flow batteries.

When sunlight hits a solar panel, photons are converted into electrons, as these electrons pass
through the solar cells they are converted into direct current (DC) electricity. That electricity is
sent to an inverter which converts it into alternating current (AC) electricity. It is then transferred
to the electrical panel and distributed throughout the home or building. It can be used to power
home appliances, charge devices and more. A standard solar system will include multiple
panels wired together to form a solar array. The more panels you use, the more energy you can
generate. However, there are a number of factors that affect energy generation, the temperature
and the direction of the panels being key among them.

You can opt for a stand alone solar system that is self-contained or portable and is not
connected to the utility grid. Or choose a grid-tied system that allows a home run on solar power
while still being connected to the main electrical grid that supplements any power needs.

A utility meter monitors the flow of electricity for the grid to a home or property and vice versa.
When a solar system produces more electricity than is being consumed, the excess is sent back
to the utility grid and the meter runs backwards and you are credited for the electricity generated
through the process of net metering.

That sums up the basics of how solar power is generated and converted into usable energy.
However, the world of solar power is vast and fascinating, so stay tuned for more insights. And if
some of the jargon is making your head spin be sure to check out our glossary of solar power
terms. In the meantime, we’re leaving you with a few fun facts.

● 173,000TW of energy consistently strike the earth as solar radiation at any moment,
cloudy days included. 1
● Every hour sunlight hitting our planet can generate enough power to theoretically satisfy
global energy needs for a year. 2
● Solar energy users save up to 35 tonnes of carbon dioxide and 75 million barrels of oil
each year. 3
● Solar panels don’t need direct sunlight to generate electricity. 4
● Australia is a leader in residential solar, with more than one in five homes now using
solar energy. There is more than one solar panel installed per person in Australia. 5