A Solar Powered Olympics from The Land of the Rising Sun 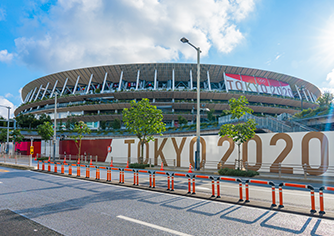 With its carbon-neutral games, the 2020 Tokyo Olympics turned out to be a winner all the way.

The new and environmentally-aware world is steadily recognising the importance of incorporating renewable energy technology with a view of reducing greenhouse gas emission. When Japan got the opportunity to host the 2020 Olympics, it went a step ahead and declared that it would use 100% renewable sources for electricity at the games. In keeping with the UN’s 17 sustainable development goals, the Japanese government wanted to conduct carbon-neutral games.

Olympics stadiums and other games arenas are power guzzlers even when not in use. To tackle this issue, Japan installed solar panels on the roof and on the paths leading to the games arenas. The architect of the stadium, Kengo Kuma, said that the solar panels were intentionally attached to the roof and visible to spectators to make it a “visible part of the design.” What’s more, the panels were also used to power the foliage around the stadium.

The electricity for the Olympics was produced in the Prefecture Fukushima, a hub of solar and wind power, in association with the petroleum company ENEOS. The energy was generated from wood biomass power and solar power. All the competition venues, including facilities in Ariake Urban Sports Park, which hosted the BMX freestyle, BMX racing and skateboarding events, were also powered completely by renewable electricity produced in Fukushima Prefecture. The Tokyo Organising Committee of the Olympic and Paralympic Games (Tokyo 2020) went a step further by ensuring that the renewable energy mix included electricity from the areas affected by the Great East Japan Earthquake and Tsunami nine years ago.

Prior to the Olympics there were reports that Tokyo intended to install “solar roads” as part of their mission to have an environmentally friendly Olympics and Paralympics. The purpose was that a series of solar panels fitted beneath the surface of the streets would generate energy. A special resin would protect the surface from the impact of heavy vehicles. Incidentally, Normandy in France was the first city to make the world’s first solar panelled road in 2016. The Tokyo government decided to build these roads on government owned facilities like car parks where there would be more generation of electricity.

Tokyo hoped that installing the solar panels before the Olympic games would help in promoting the technology, prompting more cities in the world to take it up, thereby bringing down its cost. Japan’s first solar road was already installed outside of a 7-11 store in Sagamihara, Kanagawa Prefecture in May. The road annually generates 16,145 kilowatt-hours of electricity, which supplies roughly 9% of the store’s energy consumption.

Meanwhile, with the use of 100 per cent renewable energy for its venues and facilities, the Olympics village was dubbed as the Hydrogen City. Hydrogen was used to heat water for cafeterias, dormitories and training facilities. Interestingly, the Olympic flame itself was fuelled by hydrogen. As for transportation, the athletes and officials found themselves ferried around in 500 Mirai hydrogen fuel cell vehicles and 100 fuel cell buses. To top it all the medals were quite the winners. Apparently 40,000 tonnes of tech waste and 5 million old mobile phones were recycled to fashion the gold, silver and bronze medals.

With its renewable energy initiative, Japan seems to be inching sure footedly towards its target of reaching net-zero emission by 2050. Understandably there is also much more interest generated around the use of solar power in a bigger context. But then that is only to be expected from the land of the rising sun.