Can temperature take a toll on solar inverters? 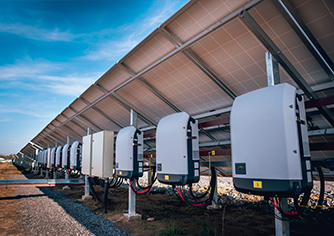 Solar inverters are pretty low maintenance and resilient too. However, certain factors could be compromising the energy output of your solar power system.

Most of us are aware that high temperatures can affect the power output of PV modules but what is often ignored is that temperatures can influence the performance of solar inverters too. That’s probably because it takes extreme temperatures to compromise an inverter. Let’s take a closer look.

Too hot to handle?

A common misunderstanding is that solar systems work better in high temperatures. What’s important to understand here is that sunlight and heat are not the same and too much of the latter is not a good thing. When it comes to inverters, the temperature needs to stay below a certain level. If it rises above this, materials inside the inverter could start to degrade – insulation could become brittle, solder could expand and crack while metal components in capacitors could wear out.

However, it is not just external temperatures that can cause an inverter to heat up. During the process of converting DC power to AC power, heat is generated. This adds to the ambient temperature when it is expelled via fans or a heat sink. To cope with this, inverters are designed to sense the system overheating and automatically reduce power output. This feature is called temperature derating. Once it senses a drop in temperature the inverter restores to its previous setting and increases power output. This process protects sensitive components of the system and extends their lifetime.

It’s important to understand that most inverters have a wide operating temperature range and it is only extreme temperatures that affect performance. That being said, with advances in technology this range is growing wider. At one time inverters would start derating at temperatures over 25℃, today it would need to rise over 40℃-50℃, maybe more.

On the other hand, the cold doesn’t really negatively impact an inverter. However, it is important that they are kept dry and away from snow, ideally indoors.

How to keep temperature from affecting your inverter

The first thing to do is consult an experienced solar retailer or installer and get their advice on the ideal location to install your solar inverter – this of course mainly concerns string inverters as microinverters must be installed under the solar panels. You can also read the installation guide for best practices, but here are a few things to keep in mind.

Solar inverters are pretty low maintenance and resilient too. However, it is important to be aware of what factors could be compromising the energy output of your solar system. To get the most of your system it is always best to consult a trusted solar installer to find the best solar inverter to deliver the energy you need.

PrevPreviousThe perks of solar batteries
NextEvery panel has its placeNext