China – The sunshine capital of the world 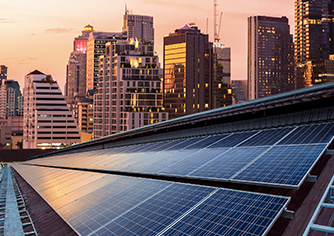 China has emerged as a world leader when it comes to distribution of solar power. It boasts of developing one third of the entire world’s solar capacity. At the end of 2020, China’s total installed photovoltaic capacity was a whopping 253 GW. With abundant solar resources, especially in the western provinces of the country, China finds itself as the largest market in the world for both photovoltaics and solar thermal energy. What’s more, at the 2020 Climate Ambition Summit, the General Secretary of the Chinese Communist Party Xi Jinping announced that China planned to have 1,200 GW of combined solar and wind energy capacity by 2030.

What began as a development for space satellites, China’s photovoltaic industry turned its focus on using solar for domestic energy use as far back as in the late 1990s. The government played its part in encouraging this development by introducing great incentives, further fuelling the solar power market in the country.  By 2013, China became the top installer of photovoltaics globally. In fact, it overtook Germany in 2015 to become the world’s largest producer of photovoltaic energy. China currently owns the second-largest solar plant in the world, the Huanghe Hydropower Hainan Solar Park, which has a capacity of 2.2 GW.

To fulfil their solar goals, China has even gone on to install solar panels in public buildings, a rare occurrence. The Great Hall of the People building in Tiananmen Square, for instance, has solar installations on its rooftop. This was the result of the National Energy Administration’s clear message to have county level trials of distributed solar power generation to encourage rooftop solar.

China is a step ahead even in the field of solar panel innovation, with great plans afoot. Just to give an example, Trina, a Chinese company and the largest solar panel manufacturer in the world, broke the world record on the efficiency of multicrystalline silicon solar cells in 2014 and 2015. China’s efforts in the area of solar energy are spurred on thanks to the heavy budget allocation by China’s government towards research and development of solar power. Besides, solar manufacturers in the country can avail attractive debt capital offered by various banks to jumpstart their business. Incentives in the form of reduced feed-in tariffs and heavy subsidies were promised to likely solar power developers to give further impetus to the solar power market.

Considering that China is mass producing photovoltaic cells, bringing the costs down considerably, it has led to other countries launching solar power projects with renewed enthusiasm. Apart from being the biggest producer of solar panels, China has also invested heavily overseas and is playing a major role in financing solar energy projects all over the world, making the country a big name in the international solar energy industry.

China’s search to find clean energy solutions has had far reaching positive effects on the environment and brought about a paradigm shift worldwide when it comes to launching renewable energy projects. Though China, as a country, is the largest carbon emitter in the world, it has vowed to put an end to that by 2030 through its initiatives with renewable energy. There is no doubt that China has set about a global solar revolution with its commitment for a cleaner environment in the near future.