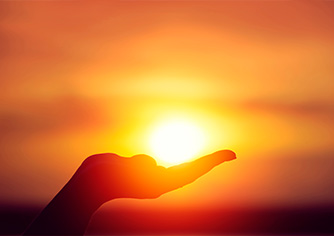 A glossary of terms associated with solar power to help you understand what it’s all about.

Does solar talk sound Greek to you? It doesn’t have to. Here’s a quick guide to help you understand what the buzz is all about.

Alternating current (AC): A type of electrical current which periodically reverses direction and changes magnitude. It is the form of electricity consumed by homes and businesses.

Ampere (Amp): A measurement of electrical power. You can find out how efficient a power-generating device is by measuring the amp per hour ratio (Ah/AH).

Angle of Incidence: The angle a ray of sun creates with a line perpendicular to the surface.

Balance of system (BOS):  The physical parts that make up a solar system apart from the panels i.e inverters, wiring, mounting hardware and monitoring system.

Battery capacity: The maximum electrical charge, expressed in ampere-hours, which a battery can deliver under a specific set of conditions.

Clean energy council (CEC): The peak regulating body for the clean energy industry in Australia. All members must agree to a code of conduct and if they meet its standards they become accredited installers and retailers.

(Solar Power Nation is an Approved Solar Retailer with the CEC and complies with the set code of conduct.)

Charge controller: A component that controls the flow of current to and from the battery, protecting it from over-charging and discharging. It may also indicate operational status of the PV system.

Community solar: A solar power plant whose electricity is shared by two or more homes.

Cycle: Cycle here refers to the discharge and subsequent charge of a battery.

Direct current (DC): A type of electrical current by which electricity flows in one direction through the conductor.

Efficiency: Efficiency here refers to the percentage of sunlight captured by the solar panels and converted into usable electricity.

Electrical or utility grid: The interconnected network of equipment that delivers electricity from suppliers to consumers.

Fixed tilt array: A photovoltaic array set in at a fixed angle with respect to a horizontal position.

Flat-plate array:  A photovoltaic array that consists of panels laid flat, often in a fixed position. It uses direct and diffused sunlight.

Grid-tied solar system: Also referred to as grid-tied PV system. A solar system that is connected to a local utility grid and exports excess electricity to the grid.

Gross metering: A scheme whereby all the energy produced by your PV system is exported to the grid in exchange for a fixed fee. Your home then is powered by electricity supplied by the grid and you are charged according to consumption.

Interconnection agreement: A contract between the homeowner and the local utility allowing the homeowner to connect their solar power system to the electric grid.

Irradiance: The amount of power received per a specific area. Irradiance is typically demonstrated in kilowatts per square meter (kW/m2).

Isolator: An electrical safety device used to manually interrupt the connection between the panels and the inverter. It is typically used when the system needs to be shut down for maintenance or repairs.

Kilowatt (kW): A standard unit of electrical power equal to 1000 watts, or to the energy consumption at a rate of 1000 joules per second.

Kilowatt peak (kWp):  The peak output power of a PV system or panel.

Load: The demand on an energy producing system. Usually expressed in terms of amperes or watts in reference to electricity.

Meter: It monitors the energy production of your home solar system. When using solar power a bi-directional or digital meter is essential.

Micro-inverter: An inverter that is placed behind every solar panel to optimise energy production for each individual solar panel. This ensures that one poorly performing panel does not affect the performance of the entire system.

Monocrystalline solar cells: Solar cells made up of a single silicon crystal. They are the most efficient but are also typically more expensive.

Multicrystalline or polycrystalline solar cells: Solar cells made up of fragments or shards or silicon.

Net metering: When a grid-tied solar system produces more energy than is needed, the excess power is sent to the electrical grid to be redistributed. At night, the grid will provide conventionally created power for your consumption. A net meter records the energy sent compared to the energy received from the grid and credits or charges you according to local rates and rules.

Off peak: A time period during which power consumption is at its lowest, typically during the night.

Optimiser: A component that is installed in each individual panel to optimise the energy output of every panel in the array. They are connected to a string/ central inverter for the final conversion of DC to AC.

Peak demand: A time period during which power consumption is at its maximum.

Peak sun hours: One peak sun hour is an hour’s worth of sunshine at an irradiance of 1 kilowatt per square meter (kW/m2). Peak sun hours are affected by the time of day, the season, the presence of clouds and geographic location.

Photovoltaics (PV): The conversion of sunlight to electricity through a naturally occurring process using semiconductors.

Photovoltaic (PV) effect:  The phenomenon that occurs when photons knock electrons loose from the atoms they strike. When combined with semiconductors, electrons flow in one direction across a junction, creating a voltage.

Power purchase agreement (PPA): A financial agreement whereby your developer/ retailer takes care of the design, permits, financing and installation of a solar power system on a property at little to no cost. You then pay a fixed rate to the retailer for the power generated. This is typically lower than the local utility retail rate.

Series regulator: Type of battery charge regulator where the charging current is controlled by a switch connected in series with the photovoltaic module or array.

Smart grid: Smart grids are electrical grids that incorporate digital technology, allowing for computer-based automation, remote control, and two-way communication between a utility and its customers.

Solar battery: A device that saves excess energy produced by a PV system. This energy can be consumed after sundown, during peak demand or a power outage.

Solar canopies: Solar panel arrays that are raised above the ground on structures that leave the land underneath usable for other purposes, such as parking lots.

Solar cell:  A single light-capturing unit in a solar panel.They are made of a semiconducting material like silicon.

Solar design: The layout of a solar system, optimised for maximum energy production based on roof or land characteristics, the angle of the sun, shading, climate and aesthetic appeal.

Solar inverter: A component of a solar system that converts the direct current (DC) generated by solar panels into alternating current (AC) which is used to power a home or building.

Solar lease:  A contract with a solar company to have a solar energy system installed on your roof and pay the company a fixed monthly fee to rent the system in exchange for electricity.

Solar loan: A loan provided by a bank, credit union, or specialty provider to finance the cost of buying a PV system.

Solar panel: Also referred to as module. An assembly of connected solar cells used to absorb sunlight and converts into electricity. They can be mounted on roofs or the ground.

Solar shingles or tiles: Thin-film photovoltaic strips or tiles that can be applied directly to roofing cloth, just like regular roofing shingles. These solar shingles capture sunlight and convert it to electricity.

Stand alone solar system: A solar system that is self-contained and not connected to a local utility grid. Usually adopted in remote areas.

Standard test conditions (STC): A fixed set of industry approved conditions under which solar panels are tested. They are compared against each other and rated based on performance in  these conditions.

System availability: The percentage of time when a solar system will be able to fully meet the load demand.

Temperature coefficient:  The parameter used to calculate the loss of energy generation due to rise in operating temperature and determines how well a panel will perform in high-heat conditions.

Thermophotovoltaic cell (TPV):  A device where sunlight concentrated onto an absorber heats it to a high temperature, and the thermal radiation emitted by the absorber is used as the energy source for a PV cell that is designed to maximise conversion efficiency at the wavelength of the thermal radiation.

Tilt angle: The angle at which a photovoltaic array is set to face the sun relative to a horizontal position. The tilt angle can be set or adjusted to maximise seasonal or annual energy collection.

Zero net energy (ZNE):  Identifies homes or buildings that generate as much energy as they consume, usually via a combination of green building techniques that include a solar energy system.