Solar energy and the ocean 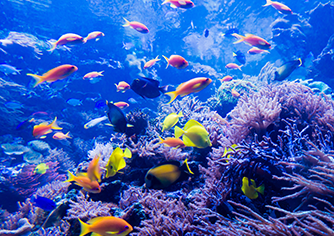 How solar energy can turn the tide for oceans

The reality of rising sea levels and the problems associated with it cannot be taken lightly anymore as it wreaks havoc on our marine habitat – many of whom are on the brink of survival – and of course, the entire coastal ecology.

The main culprit for rising sea levels is global warming. Simplistically put, the melting of the glaciers and ice sheets all over the world is adding water to the ocean. Burning of fossil fuels is adding to the problem and leading to a rise in ocean acidification that is affecting sea creatures like oysters and shrimp by dissolving their shells. It also poses a threat to other marine life like bleaching of coral reefs, reducing their life span and causing entire reef ecosystems to deteriorate.

Renewable energy – the only way forward

Solar power to the rescue

With the sun emitting limitless radiation, using solar energy appears to be the best option when it comes to renewable sources of energy. The most sustainable choice, it is cost-effective and does not emit greenhouse gases.

Preventing global warming by making use of solar energy for our day-to-day activities, like installing solar panels to generate electricity, solar cooking and using solar powered vehicles can go a long way in sustaining our environment and protecting our oceans.

Since 70% of the earth’s surface is covered by water, our oceans are the world’s largest solar collectors. With the heat from the sun warming the surface water of the oceans more than the deep ocean water, the temperature difference leads to the creation of thermal energy. It is said that even a little amount of this trapped heat can fuel the entire world. All we need is to tap on this natural source of energy. The Natural Energy Laboratory of Hawaii has been conducting research on the ocean thermal energy conversion (OTEC) process to find a sustainable energy solution.

Among the many solar inventions that different countries are making is the solar boat. Rather than using gasoline, solar boats have marine solar panels installed on a boat to convert the sun’s energy into electric energy. Apart from being cost-effective, they are also silent, thus reducing noise pollution and leaving marine life at peace.

These eco-friendly man-made floating islands use the abundant ocean surface to help generate solar energy. These sustainable floats can be used to create solar power stations on the sea and also generate drinking water through the installation of offshore desalination plants. Oceans of Energy has set up a 50-kW offshore pilot PV project in the North Sea, which relies on standard solar modules. According to the company’s CEO and founder, Allard Van Hoeken, “Offshore PV could help the Netherlands cover 50% of its energy demand, mainly by deploying solar close to existing or planned offshore wind projects.”

Why solar energy is making waves

The situation underwater is grave and the damage to our very own Great Barrier Reef  – which, according to BBC, has lost half its corals since 1995 – is just the tip of the iceberg. Switching to renewable sources of energy like solar power is a huge step towards combating climate change and protecting the oceans we love, so let’s take it together.