The way of the Gnowee 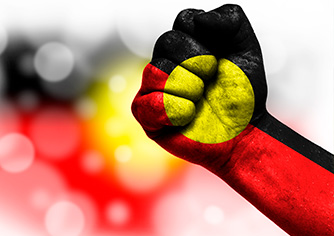 The First Peoples and their sun.

Lately, there has been a lot of articles about how solar/clean energy is slowly gathering momentum in Australia. For example, there was an article about how Queensland is now building solar-friendly homes, with a view towards sustainability. And this poses a very interesting question.
From where exactly does our love affair with the sun start?

Well, as a nation, we’re a bunch of sun-loving people. But this feels more than just an average Aussie bloke’s fascination with the sun.
To get to the bottom of this, let’s embark on a journey back in time, long before Cook and his ‘merry’ mates had set foot on this island, a time when the only inhabitants were the First Peoples.

The first giveaway of the sun’s importance in this culture was their flag – which literally has a sun. And nothing speaks more about a culture’s lifestyle, than its mythology.

The bird that threw the sun

When most cultures around that time found God in deities, Indigenous Australians found God in nature. Some believe the Sun is a woman and the Moon is a man. Some believed that a bird threw a prepared emu egg into space and that became the sun (or Gnowee).

In the Wotjobaluk culture, she is the solar goddess. She was once a woman who lived on Earth at a time when it was absolutely engulfed by darkness. One day while foraging for yams, she left her little son at home. Coming back, she couldn’t find him. She looked for him till the edge of the world and emerged to the other side. She climbed to the sky to locate her son, and made the sun her torch and is still looking for him, wandering the sky everyday.

The First students of the sky
Would you believe they were also sophisticated astronomers? In the middle of Melbourne and Geelong in Victoria, you will find a peculiar egg-shaped arrangement of around a hundred odd basalt rocks all between 0.5-1m in height. To the uninitiated, it would just be a bunch of randomly placed rocks. But it is much more than that. According to historians, these rocks are all aligned to track the sun’s movement and the arrangement indicated solar points such as the equinox or the solstices.

From the sky, to life on Earth

The design of the traditional homes of the indigenous people is also directly related to the sun. In South Australia, they would have their homes open up to let the sunlight in and prevent the cold south wind from entering, interlocking doors and windows with leaves and twigs.

Even in their food and medicine, the sun played a huge role. Commonly known as ‘Bush-tucker food’, it was a common practice to have spices like Lemon Myrtle sun-dried and powdered, like a spice rub on a piece of meat before it’s cooked on a fire. This practice of sun-drying herbs was extremely prevalent even in indigenous medicine.

A culture eclipsed, not extinguished

But sadly, the culture has had to endure systematic erasing, and because of it, all we have left are the disjointed words of the current elders. But, all’s not lost. These are the people who make Australia so unique, so rich and so diverse. They were the ones to take care of the land and give back to the land, much before we started doing, and here’s to the sun always shining on them.